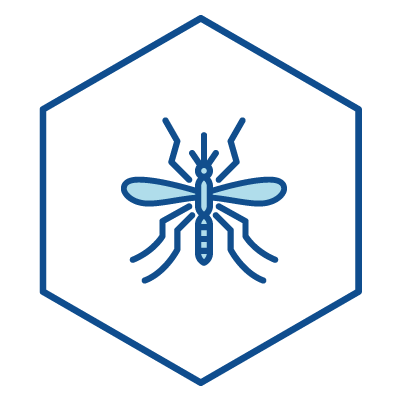 The Zika virus belongs to Flaviviridae and the genus Flavivirus, and is thus related to the dengue, yellow fever, Japanese encephalitis, and West Nile viruses. Like other flaviviruses, Zika virus is enveloped and icosahedral and has a nonsegmented, single-stranded, positive-sense RNA genome.

There are two lineages of the Zika virus: the African lineage, and the Asian lineage. Phylogenetic studies indicate that the virus spreading in the Americas is most closely related to the Asian strain, which circulated in French Polynesia during the 2013 outbreak.

The Zika virus is transmitted by daytime-active mosquitoes as its vector. It is primarily transmitted by the female Aedes aegypti in order to lay eggs, but has been isolated from a number of arboreal mosquito species in the Aedes genus, with an extrinsic incubation period in mosquitoes of about 10 days.

Since 2015, news reports have drawn attention to the spread of Zika in Latin America and the Caribbean.

In 2015, Zika virus RNA was detected in the amniotic fluid of two pregnant women whose fetuses had microcephaly, indicating that the virus had crossed the placenta and could have caused a mother-to-child infection.

According to the WHO on 5 February 2016, a causal link between the Zika virus and microcephaly was “strongly suspected but not yet scientifically proven” and “Although the microcephaly cases in Brazil are spatio-temporally associated with the Zika outbreak, more robust investigations and research is needed to better understand this potential link.”

The new recommendations include offering serologic testing to pregnant women without Zika fever symptoms who have returned from areas with ongoing Zika virus transmission in the last 2–12 weeks; and for pregnant women without Zika symptoms living in such areas, they recommend testing at the beginning of prenatal care and follow-up testing in the fifth month of pregnancy.

ZIKA, Dengue, Chikungunya & West Nile viruses – transmitted by the “Tiger” Mosquito – has become the biggest new viral challenge across the Globe in recent years. These diseases experienced unprecedented expansion from limited endemic areas to all around the world, especially in the Americas due to the tropical climate, the presence of the  mosquito vector, intensive human migration and increasing worldwide tourism. ZIKA Virus – a flavivirus that is often misdiagnosed as Dengue or Chikungunya.

The great concern about ZIKA has been the possible association with severe neurological disorders in fetuses of women infected while pregnant. There has been a marked increase in cases of microcephaly in the areas of the ZIKAinfection occurrence. There are no vaccines for any of these illnesses, ZIKA included.

Thus, accurate and timely Diagnostics allows the patient to have the fastest supportive care and prevents wider spreading of the diseases.  ZIKA virus testing in the prenatal field has become of utmost importance.